Weeding Out the Undesirables from Your Prospect Funnel

Boy I sure PO’d a lot of now ex-readers the last time I last wrote you.

That was when I sent you my "Pig’s Ass" email a little over a week ago (you’ll find a link to the pictures of that below).

One reader commented on how she didn’t like my language:

I don’t like your articles. I think your approach is less than classy.

And another reader with an alphabet soup of high falutin letters after his name that he obviously uses to show himself how smart he is had to resort to insults:

Eating animals is a very strong indicator of IQ/Ego imbalance -advertising the fact is prima fascia evidence of extreme stupidity.

Now the average dude would find these comments a bit unnerving, and they would probably serve to reign him in, keep him from saying things that might offend people or hurt their feelings.

But ol’ Shameless Shamus is not the average dude.

I see getting rid of readers like this as a good thing.

Tis a good thing because you can’t please everyone. And when you try to please everybody, and be all things to all people, you just wind up being a bland nobody to everyone.

Don’t try and mold your company, your product, or yourself to fit every different prospect out there. Not only will you lose yourself, but also it just won’t work.

So therein is today’s sales tip.

Focus on connecting with the people who are most likely to want to do business with you. Those people and companies who share your ideals, values, and approach to life and business.

You’ll get more deals this way, cause people figure out who you are eventually anyway.

Now about that Pig’s Ass…

The camping trip and cookout in the Sierra Mountains of California was awesome. For those of you who are curious and know the area, I was at a private lake near Sugar Bowl. I am not going to disclose the exact location though. I value my privacy too much and some things are just so good they gotta stay a secret.

Anyway, here’s a picture of me holding the 35 lbs. of raw Pig’s Ass just before throwin’ it on the open campfire: 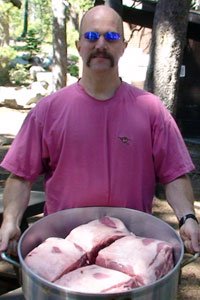 And here is the delicious slow-cooked result about after about 4 hours of outdoor cooking: 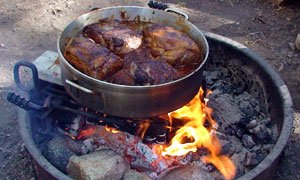 Now it turns out that I didn’t really eat a half a pig’s ass with my friends last weekend. This meat was actually called pork shoulder, which is also sometimes referred to as Pork Butt, Boston Butt, or Boston Pork Butt (thanks to you if you sent me your educational comments about this).

But it sure was a hell of a lot more fun to call it a Half a Pig’s Ass!

P.S. You really should be only selling to those people most likely to buy from you. To learn more about how to focus yourself in this way and get the conviction to tell crappy prospects to take a hike, go get yourself some Persuasive Selling Skills right now.

More Prospects is Not the Answer

A Powerful Lesson in Sales Negotiation

Expect a Good End to Your Sales Year

In Vegas, Wondering Where The Winners Are…

Crush Your Competition with My Free Shameless Sales Tips

I want to give you my Free Shameless Sales Advice. Just give me your email address and every day I'll send you something straight outta my head on how to be a Shamelessly Successful Sales Professional.

You have Successfully Subscribed!